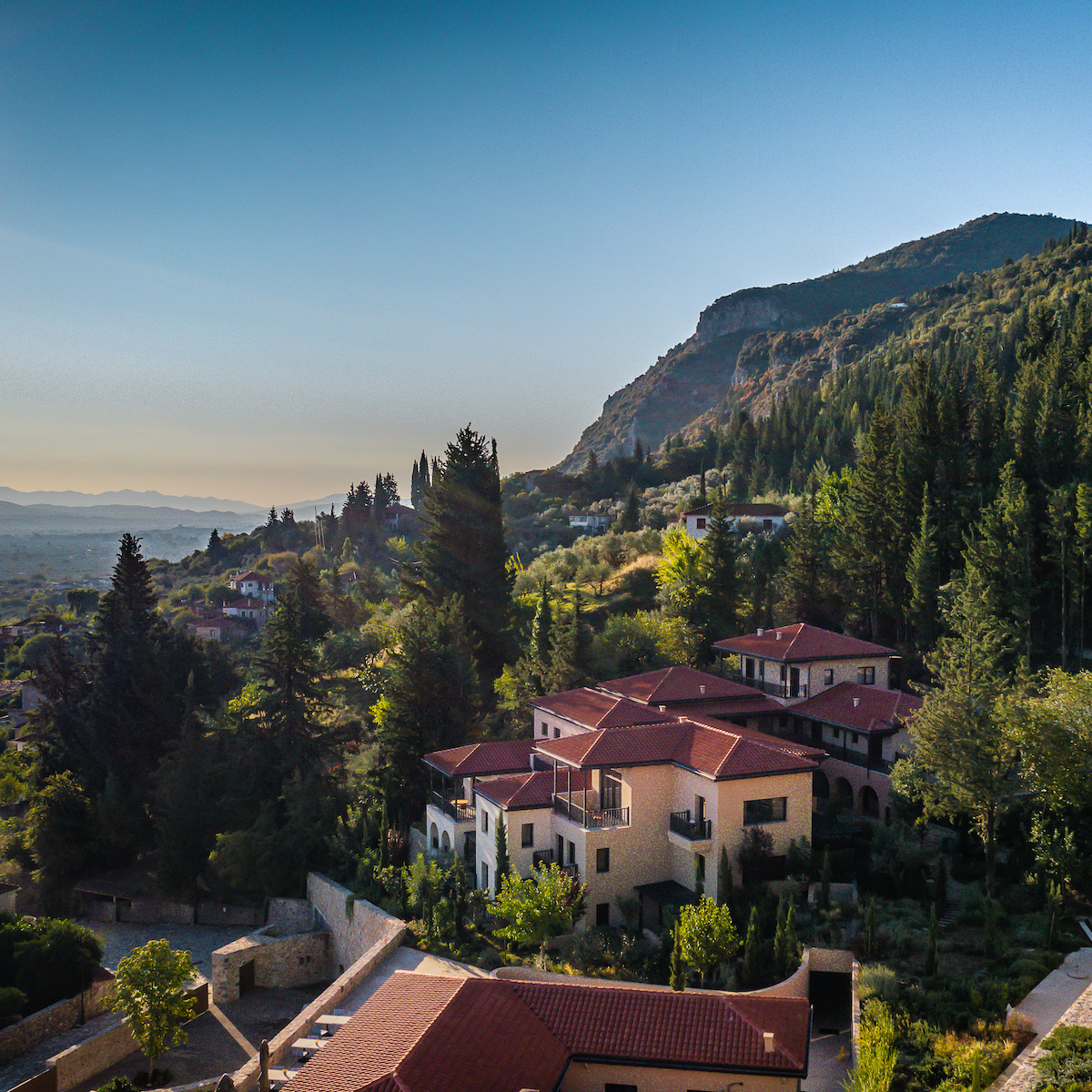 With over 250 guaranteed days of sunshine per year and over 200 islands, the Mediterranean country of Greece is well known for its holidays by the sea and on the sand. Yet there is so much more to the country than a summer getaway – Greece also has award-winning spas. Known for its medicinal and therapeutic benefits since ancient times, whether you choose to experience it at one of the top 10 spas in the world, one that nourishes the environment and nature of the Peloponnese, or to share warm waters with skin munching on Garra rufa fish, you won’t be disappointed with the choices that each offers.

I am sharing with you 3 unique spa experiences in Greece to help you plan your spa vacation. I experienced all 3 either for free or for a reduced price during my stay here in Greece.

Aidipsos is a coastal spa town surrounded by mountainous landscapes on the north coast of Greece’s second largest island, Evia. Famous for its healing properties since the 4th century, the city has over 80 natural hot springs with water drawn from natural wells as deep as 9,800 feet and ranging in temperature from 82 to 187 degrees Fahrenheit.

It is here that you will find one of the ten best spas in the world – Thermae Sylla.

The city’s first modern hotel was built over 120 years ago. Over the years, Thermae Sylla has attracted famous guests such as Winston Churchill and Aristotle Onassis, to name a few, and is popular for its natural underground thermal water that fills its pools. Therapeutic and medical treatments such as massages, mud therapy, physiotherapy and natural nutritional therapies are popular, or just come and enjoy a hammam and swim in its outdoor and indoor thermal water pools. You can also relax in the thermal pools with hot water in the sea, just outside the hotel.

In the evening, dine on the terrace at the front of the hotel while watching the sun slowly spread across the Mediterranean.

Away from spa activities, the area itself offers a lot to explore; from the Cave of Syllas where the Roman General Syllas cured the arthritis in his legs and where you will also find ancient Greek inscriptions that pay homage to Roman rulers of the time, including Caesar.

Thermae Sylla can also organize day trips further afield to the unique 11th century Meteora monasteries – built atop unique rock formations and a UNESCO protected site – or to Delphi, the navel of the universe where the temple of the god of Apollo stands.

All in all, if you are looking for a specific treatment, a relaxing break at an award-winning spa on a Greek island just 3 hours from Athens or to explore the wider region as well, then you can’t go wrong with the Thermes Sylla Spa.

Pro tip: Be sure to book your spa appointments in advance. You will need to complete a comprehensive health questionnaire and bring a swimming cap, no one is allowed to enter the pools without one. Simple hats can be purchased there.

Also, Evia is a mountainous island, so the best route is to travel most of the way from Athens along the national road E75 (it has tolls) along the mainland until you reach the coastal town of Arkitsa , then take the small car ferry straight on to Aidipsos. It’s a lot less annoying – or let the bus pick up the tension. There are several daily departures.

Ancient walled towns, Byzantine monasteries, the Taygetos mountain range and pine forests are just a few of the wonders that await you when you vacation in the Peloponnese region of mainland Greece. This is where the walled city of Mystras, listed in the 13th century, listed as a UNESCO World Heritage Site, with its plethora of Byzantine monasteries and spiritual atmosphere is located, a perfect location for Greece’s first wellness spa. .

Founded in 2018, Euphoria is the vision of ex-banker Marina Efraimoglou. She suffered from physical health issues and was keen to help people on their own healing journey. The spa is a symbiosis of Chinese medicine and ancient Greek philosophy.

The location of Mystras is in an ancient setting, which is why Euphoria’s 45 rooms / suites are tastefully decorated to reflect the honeyed stone hues of the natural surroundings. Architecture is one with the landscape.

There is a choice of several wellness programs that can be booked at Euphoria, such as ‘Feel Alive Again’ – a 3 night post-pandemic program that aims to release negative emotions, stress, tension and stress. anxiety. It incorporates treatments such as dance therapy, meditation and expressive movement while using unique facilities such as the outdoor infinity pool or the Cave Therapy salt room. The salt room has a wall made entirely of salt where you sit in a sauna environment and allow the wall to emanate a natural disinfectant with antimicrobial and antibacterial properties. The Waterwell Kneipp treatment includes hot and cold foot baths to promote circulation throughout the body.

Avoiding these, just relax and enjoy the natural surroundings by taking a walk in the forest or strolling through the beautiful traditional village of Mystras where you can observe daily life or visit one of the many churches for inspire you.

Its location in Mystras is just 10 miles from Sparta, one of the most powerful city-states in ancient Greece and famous for being the site of the Peloponnesian War between Sparta and Athens. Also, be sure to take the time to explore Sparta, a fascinating city that helped shape Greek history during your stay in Euphoria.

Pro tip: Euphoria Retreat is one of Europe’s leading wellness destination spa hotels – be sure to book in advance.

You don’t have to travel far from the Greek capital to have a unique spa experience. If you are on vacation in Athens, first select your accommodation from 7 amazing boutique hotels. Athens offers a plethora of activities for both first-time and returning visitors. What many miss, and shouldn’t, is the Athenian Riviera – a stretch of coast stretching from the port of Piraeus to the Temple of Poseidon at Cape Sounion. It is along this coastal stretch that you will find the unique natural spa called Lake Vouliagmeni.

It is a geological phenomenon, formed after the roof of a cave collapsed due to erosion caused by high water. In its place is now a lake of freshwater and brackish seawater whose warm thermal waters – freshwater from the surrounding mountains and salt from the coastal waters – combine to make water temperatures throughout the world. year between 70 and 77 degrees Fahrenheit, which allows swimming all year round. possible.

The water is rich in minerals such as hydrogen sulfide and also contains a plethora of Garra rufa, a skin-nibbling â€œdoctorâ€ fish. This combines to make the lake a very healthy alternative swimming spot along the Athenian coast.

Lake Vouliagmeni is not a seaside resort, so there is no hotel. But the Four Season Astir Palace is a perfect place to base yourself, and only a few minutes from the city.

These 3 unique spa experiences in Greece along with ancient sites, award-winning beaches and breathtaking island views prove that the country has a lot to offer the visitor. Add a spa experience to your vacation in Greece for an unforgettable vacation.

Take note of these other possibilities in the Greek Islands:

The Ultimate Guide to Fitness Equipment