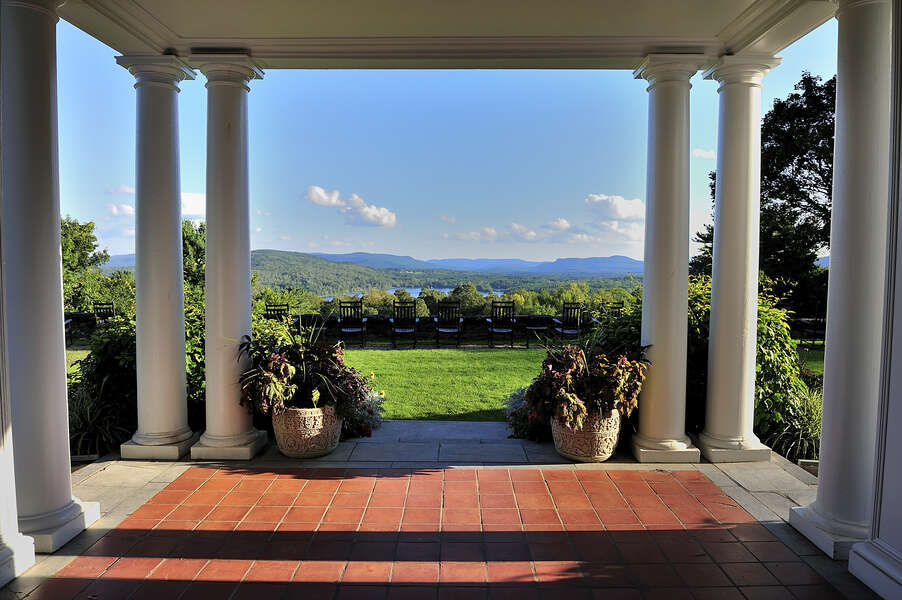 Traveling to Massachusetts isn’t just Boston, okay? In fact, a trip to the Berkshires practically serves as an antithetical experience to the state capital. Located about three hours from New York City, the area is an all-season bucolic dream with winding, scenic roads, charming properties, and top-notch restaurants.

The delight of the Berkshires is that it really feels like an escape from all that is NYC, which has also made it a top destination for some of America’s most famous literary personalities. The area is particularly ideal for outdoor adventures, which is why fall is one of its most popular travel seasons for world-class leaf viewing and more.

No matter the time of year, in the Berkshires, expect beautiful sites, great food, and some of the best museums in the country. The possibilities are endless, but here are seven of our favorite reasons to get behind the wheel.

First of all, it seems important to describe what exactly the Berkshires are. The region is technically referred to as Berkshire County and is the most westerly county in the state. Part of the Appalachian Mountains, the entire region is nestled in the Taconic Mountains, the Housatonic River and the Hudson Highlands. Don’t expect spectacular peaks, as the range is much more hilly than rocky.

Like many New England destinations, the Berkshires are a true reflection of the seasons. In winter, expect powder snow and an influx of skiers, while fall brings a magnificent spectacle of color. As you roam the area in the spring and summer, you will see fields of goldenrod and other wildflowers piercing the green and blooming along the hillsides.

Escape the chaos of city life for rolling mountains

The Berkshires are, in a way, western Massachusetts’ response to the Hamptons. There’s no way to coat it in sugar: it’s a trendy place to vacation. Although the two match each other on the factor of charm and whimsy, they definitely differ in their attitude. Aside from the fact that the Berkshires don’t have a beach (spin the classic question that pits beach people against those who prefer the mountains), it’s also much more low-key.

A laid-back destination, it lends itself well to a weekend with a good bottle of scotch and good friends, rather than a drunken night out on the town like one might enjoy in Montauk. This makes sense, given that the area was partly made famous by literary figures fleeing their otherwise hectic lives in the city for pastoral splendor. Here they bought country estates (called cottages) that look more like castles, many of which are still available for viewing today.

The history of tailgating

Take a hike (or walk)

There are many ways to experience nature in the area that present a wide range of challenges, from well-maintained Berkshires Botanical Garden for a pleasant climbing trip Mount Greylock for a day hike. For those looking for a great place in between, hikes to places like Olivia’s Outlook are perfect. Also look for signage at the start to join a self-guided mindfulness hike, which begins with audio meditation to anchor you.

Another local favorite is Bash Bish Falls which can be reached by hiking from two different states. Departing from Massachusetts, you’ll reach the falls in less than a mile, and coming from New York, it’s about a mile and a half. Either way, reward yourself with the sight of two falls diverging around the rocks and coming together in a large pool below. Unfortunately swimming is not allowed, but it is still worth a visit.

The natural splendor can also be found at Natural Bridge State Park, where you can see the only white marble arch in North America, carved out of melting glaciers over 13,000 years ago.

Feast on a locavore food scene

Fans of farm-to-table dining will be right at home in the Berkshires, where fresh, seasonal produce is pretty much the name of most restaurant games. Prairie whale, opened by Mark Firth of Marlow & Sons in Brooklyn, has a large open patio with plenty of lawn seating and uses locally sourced produce to craft its menu, some even from Firth’s own farm. Nudelle Restaurant is another local favorite, whose menu changes daily.

For a more historic and unique experience, the Old hostel on the green is off the grid and fully lit by candle light. The Red Lion Inn is known by locals as the quintessential Berkshires experience with tons of stories to tell. Take a seat in their main dining room serving New England classics, or the more rustic (and also family-friendly) of Widow Bingham’s Tavern which serves burgers, homemade chili and plenty of pints. For Vietnamese dishes, Orient Express tip has been an essential area for more than forty years. Xicohtencatl offers authentic Mexican cuisine; the Italian-American menu of Frankies also includes vegan options; and Berkshire Mountain Bakery has breads and bestsellers like their Oatmeal Pecan Cookie.

Visitors to the Berkshires have always been inspired by these unique landscapes, even famous author Herman Melville, who loved vacationing there so much that he finally decided to move. At one point, he had a blind literary date with another author, Nathaniel Hawthorne, who wrote “The Scarlet Letter”, and the two went up Mountain of monuments together near Lenox. Supposedly, during this hike, Hawthorne gave Melville some advice on where he should go for the book he was working on – a little-known novel called “Moby Dick”.

Today you can end your hike on Monument Mountain and head straight to Melville’s house called Arrowhead. It is located in the town of Stockbridge, where you can also find the Norman Rockwell Museum. Rockwell rose to fame for his paintings and illustrations depicting American life, and his long-time residence is what he once called his “best studio to date.” The museum houses rotating exhibits of his work, with 570 of his illustrations and much more.

One of the most popular attractions in the area is called The mountain, which was once home to famous author Edith Wharton, the first woman to win the Pulitzer Prize for Literature. Located in the town of Lenox, this is a huge property that was created as a more practical American interpretation of European mansions. Here, have lunch on the cafÃ© terrace, explore the estate’s rooms and stroll through its beautiful gardens.

No trip to the Berkshires is complete without visiting one of the country’s foremost contemporary art museums, the Massachusetts Museum of Contemporary Art, or MASS MoCA. The massive inventory of works spans 250,000 feet in 19 galleries in a renovated 19th century factory, whose industrial campus was extended in 2017.

The region is also renowned for its performance centers, Tanglewood and Jacob’s pillow, which offer a variety of shows and events throughout the year, but really take place in the summer. Tanglewood is home to the Boston Symphony Orchestra, but musical performances can span all genres. The fun part is you can go for more expensive tickets with great seats, or buy cheaper ones on the lawn and bring a picnic. Jacob’s pillow is great for dance performances, and theatergoers can check it out Shakespeare & Company or the Williamstown Theater Festival.

Spend the night in charming excavations

Most areas of the Berkshires are within a 20 minute drive, so it’s wise to pick a city as your base when staying here. The two most often chosen are Lenox and Stockbridge, both of which are centrally located.

For the most charming stay, however, check out Kenmore Hall Inn which is in Richmond, just under 15 minutes from Lenox. Owned by Scott Cole, formerly of the perfectly preserved Monterey General Store, he and his partner Frank Muytjens, the former head of men’s clothing at J.Crew, lived in the area and restored a historic property with design elements. which include many of their own decorative items collected over the years. Acres of private land are available for guests to explore with a fully stocked bar cart and stacks of coffee table books – and be sure to say hello to the couple’s dog, Dutch.

For those who focus on wellness, head to the huge Miraval Berkshires Resort & Spa. Its gardens look more like a whole community than a hotel, but that’s also because there is so much to do there. The resort takes relaxation seriously, with a device-free policy to help guests unplug, but offers dozens of activities throughout the day, from guided hikes and archery lessons to the courtyards. cooking, yoga and Pilates, beekeeping and coffee workshops. It’s like a summer camp for adults, basically.

Austa Somvichian-Clausen is a freelance food and travel writer who lives in Brooklyn with her girlfriend and two furry babies.

Yogajuana: How local marijuana advocates are working to break the stigma