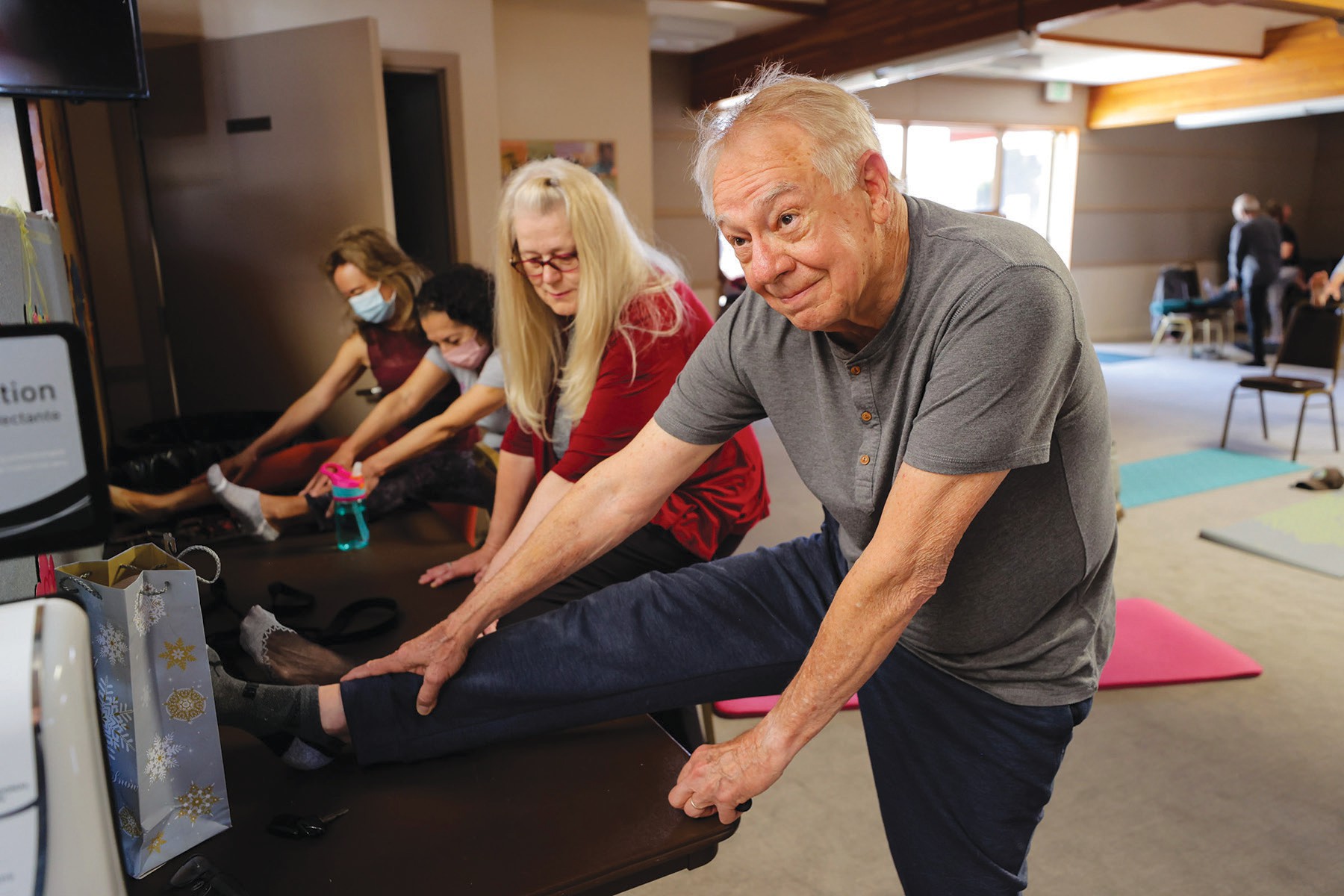 A volunteer honored for his involvement in the community

FEELS GOOD—Above, Bob Graham leads a senior yoga class at the Pleasant Valley Senior Center on May 6 in Camarillo.

Yoga instructor Robert Graham stood at the front of the room as a group of older adults watched intently.

But on the evening of May 4, the 78-year-old Camarillo resident was not leading the local senior yoga class. He received the Senior Volunteer of the Year award from the Pleasant Valley Recreation and Park District.

Graham, who has been credited with making senior yoga one of the most successful classes in the district, said it’s been a joy to see students in their 50s to 90s flourish.

“We are all happy and trying to stay healthy,” Graham said. “I love seeing people improve and being able to lead and be part of it.”

Graham joined the free one-hour class about 10 years ago.

He suffered from stiffness and pain, he said, but lacked the discipline to do the home exercises recommended by his physiotherapist. He thought a group activity would empower him and be more enjoyable.

Yoga, Graham said, has allowed him to do things he once thought were impossible.

“It’s been a real miracle for me and for the many other people taking the course,” he said. “It helps reverse the aging process.”

But when the pandemic started, classes stopped.

Once they were able to resume about a year later, the woman who had run the classes for 15 years decided she no longer wanted to teach yoga.

With his commitment to the class and his volunteer experience, Graham, a retired business owner, felt he could lead the sessions.

“I thought it was such a benefit to the community that someone had to take responsibility and get things done,” he said.

So Graham spoke to the district staff, who were happy to have his help.

After doing some research, he decided to market the class as gentle yoga for people over 50.

Lanny Binney, the district recreation supervisor, said he chose Graham to receive the Senior of the Year award because of his instrumental role in expanding the class.

“We thought we should reward him based on how well he performed in that class,” Binney said, adding that the senior center at 1605 E. Burnley St. is now overflowing three days a week.

It’s been difficult, Binney said, to engage seniors in recreational activities since the pandemic, particularly because the district is understaffed.

“We’re very dependent on volunteers right now,” he said. “(Graham) leading classes has been a huge help to us. It’s getting people involved in activities.

Graham said he is grateful for the recognition.

“It’s a wonderful thing,” he said of his award. “I never would have expected it in a million years.”

During the park district meeting, Graham took the opportunity to thank others who helped make the class possible, including Camarillo resident Carol Weaver.

Weaver, Graham said, was instrumental in expanding the class after the pandemic, reaching out to those who had previously been active at the senior center to recruit members.

She said she appreciated the improvements Graham had made to the class, adding that he always made the exercises fun.

“Bob is very friendly; he welcomes everyone,” Weaver said.

She participated in the senior yoga class for 11 years and came to enjoy the company as much as the movement.

“You make friends and see the same people over and over again,” she said.

He understands how helpless and desperate seniors often feel; his nephew died by suicide in his sixties.

“You can feel depressed about aging because you can’t do a lot of the things you used to do,” Graham said. “Yoga helps reverse that – it really does.”

He said exercising regularly gave him a more positive outlook.

Ultimately, Graham said, he hopes he and everyone who participates in the class will inspire other seniors.

“Aging doesn’t have to be quite as the medical field says,” he said. “You can actually do something about it.”

To learn more about the senior yoga class, visit pvrpd.org/yoga.