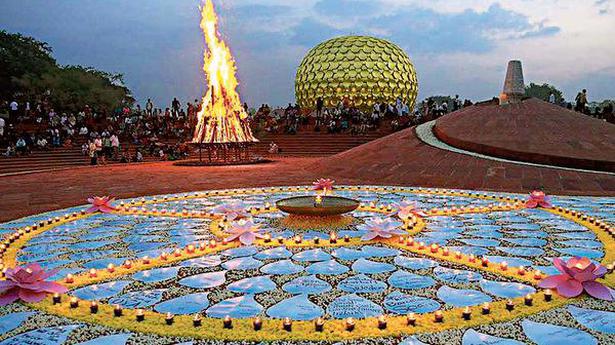 It will be a year-long celebration of the freedom fighter, philosopher and spiritual sage

Auroville will kick off the celebrations for the 150th anniversary of the birth of freedom fighter, philosopher and spiritual sage Sri Aurobindo on Independence Day, which falls on Sunday.

The traditional pre-dawn bonfire at the amphitheater near the Matrimandir will be followed by meditation and mass invocation with Sri Aurobindo’s “Gayatri Mantra”.

A press release from Auroville said the proceedings would be streamed live from the anniversary website https: //sriaurobindo150.aur oville.org

The anniversary celebrations are largely centered on the theme “Sri Aurobindo: a force in action (1872-2022)”.

This year, only Aurovilians, newcomers and Aurocard holders can join the amphitheater meditation. Strict COVID-19 protocols must be followed. Dawn is at 5 a.m. and the invocation of the Gayatri Mantra at 5:45 a.m.

A host of other events will follow from 8 a.m. on the Bharat Nivas campus and at Savitri Bhavan from 10 a.m.

As usual, Sri Aurobindo’s Independence Day message (written for All India Radio, Tiruchirapalli, and broadcast on August 14, 1947) will be played on occasion..

Auroville Foundation Secretary Jayanti Ravi will hoist the national flag and deliver a speech to mark India’s 75th Independence Day at 8:30 am. An exhibition / (SAWCHU) is also part of the events.

The Secretary will open a flower exhibition at Savitri Bhavan dedicated to the particular meanings of Sri Aurobindo and the supramantic consciousness expressed by the Mother.

This will be followed by a reading of Savitri, (Book 11, Song 1), the epic poem by Sri Aurobindo and a lecture by Shraddhavan, who is one of the early Aurovilians.

A webinar is scheduled at 7:30 pm on the theme “Sri Aurobindo’s Five Dreams for India and the World” from his Independence Day Message featuring Karan Singh, former Auroville Foundation President Sir Mark Tully, former member of the Auroville International Advisory Board, Shashi Tharoor, MP and former United Nations Undersecretary, Ameeta Mehra and Aster Patel, former members of the Auroville board.

Meet the artist who created 4,500 miniature works of art during containment