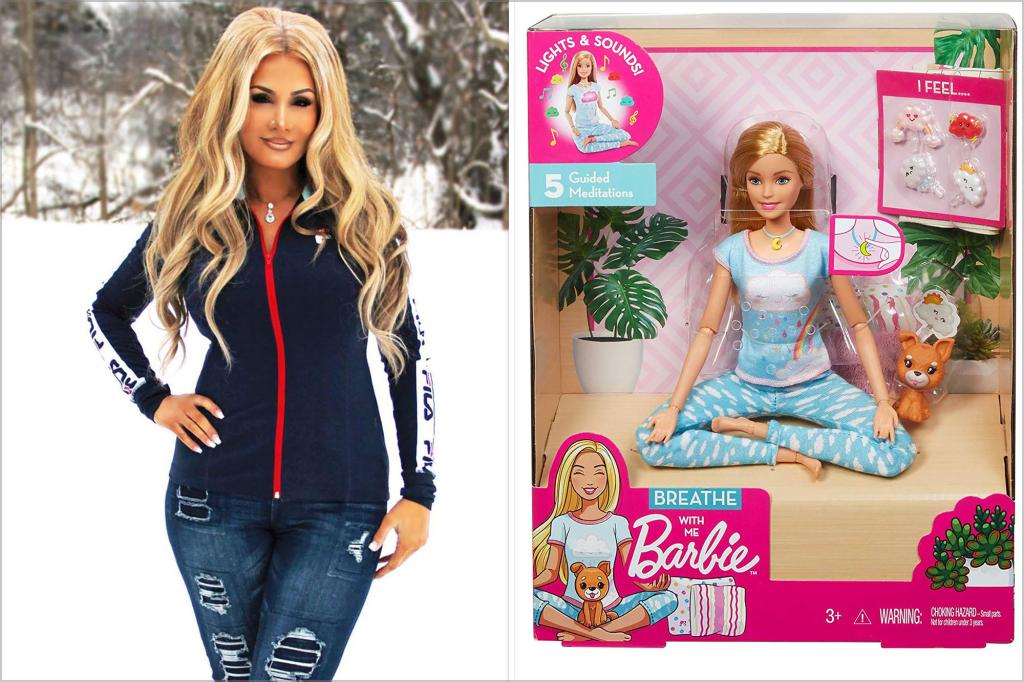 A Christian influencer is being trolled after warning parents that a new yoga-themed Barbie doll is an ‘evil attachment’.

Yasmeen Suri, a conservative Christian speaker, author and singer who shares her religious beliefs on Facebook and YouTube, recently ranted to her 20,000 Facebook followers, claiming that ‘Breathe With Me’ Barbie could cause children to become ‘possessed’. by demons” and suicidal. Her post comparing yoga to Satanism had more than 73,000 likes and 47,000 shares on Monday.

The doll, who sits cross-legged in cloud-patterned pajamas next to a small dog, also wears a crescent moon-shaped necklace with a button that, when pressed, invites Yoga- Barbie to recite five guided meditations. There are also four cloud emoticons on clips that can be placed on the pup’s head to express emotion while the doll is equipped with 15 “joints”, allowing her to contort herself into a range of yoga poses.

Mattel advertises that the doll helps children “take care of themselves” and “inspire mindfulness”, but Suri claims the doll is Satan’s attempt to “use [children] and indoctrinates them for his glory. Then, when he’s finished, he’ll destroy them.

“Satan always comes as looking innocent. He will never come with horns and pitchfork,” she wrote.

Suri asserted that “Yoga IS Hinduism. You cannot separate poses from religion. Each pose is designed to invoke a Hindu deity into the spirit realm.

“I’ve seen children possessed by demons,” she said. “As your children grow up they will become rebellious, depressed and many will be suicidal. You will not understand what is going on as a parent.

She warned parents to “remove all toys and clean [their] the children’s room of all demonic attachments.

Thousands of people posted comments on the now-viral post, with the majority of Facebook users mocking Suri.

“Thank you for promoting this! I can’t wait to run to Target and buy myself one,” said Sarah Roudabush.

“My daughter has been doing yoga for a short time, it really does her good. Also enjoying the red tint to her eyes brings a nice vibe to the room,” Trudie Macfarlane wrote mockingly.

“I want my money back! I’ve never been possessed by a demon in yoga class. What a scam!” Jaime Elliott teased.

“It’s strange that you consider stretching ‘satanic’, when a reach of this magnitude requires incredible flexibility,” Jon Trexler commented.

However, some of Suri’s followers agreed with her stance on the Barbie doll.

“I agree 100%, I think everything needs to be exposed!!!!” Viola Harrison Seagraves wrote.

Suri addressed the controversy over his claims, telling Newsweek, “There are professing Christians who have no problem with the teachings behind yoga and there are some who do. I am the one who does. Yes, I believe that when we open ourselves to occult practices, there are dangers of demonic activity.

While yoga is rooted in Hinduism, most Indians and Hindus do not practice yoga and many practices are not considered a religious exercise.

Yoga has become increasingly popular in recent years and is even taught in some schools to help children manage their physical and emotional well-being.

“The Vatican did not feel compelled to tell Catholics that yoga is completely forbidden,” archdiocesan theologian Dr. Brett Salkeld told Newsweek. “Many arguments that Catholics tend to use against the practice of yoga are, in fact, un-Catholic, or even superstitious.”