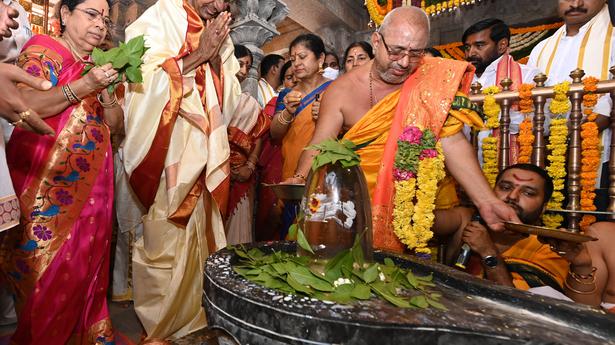 The temple, in the annex of the Sri Lakshmi Narasimha Swamy Temple, was also renovated as part of the redevelopment project.

After arriving at the Sri Lakshmi Narasimha Swamy Temple, Mr. Rao received a purnakumbh welcomed amidst Vedic chants by the priests, and he offered prayers in the sanctum sanctorum. Also present on this occasion were the Minister of Endowments A. Indrakaran Reddy and the Minister of Energy G. Jagadish Reddy.

As part of maha kumbhabhishekam for the rededication of the Shiva temple, he participated in the installation of s patika lingam and his abhishekam.

At the yagashala, Mr. Rao and the ministers played maha purnahoutito complete the temple opening rituals.

Meanwhile, the police detention of rickshaw drivers, who had been protesting the temple’s policy of not allowing them to transport worshipers for nearly a month, following Mr Rao’s visit on Monday , drew criticism.

CPI District Secretary Goda Sriramulu, condemning the police action, said arrests and detentions of aggrieved protesters every time the Chief Minister visits Yadadri would not lead to solutions but aggravate the problems.