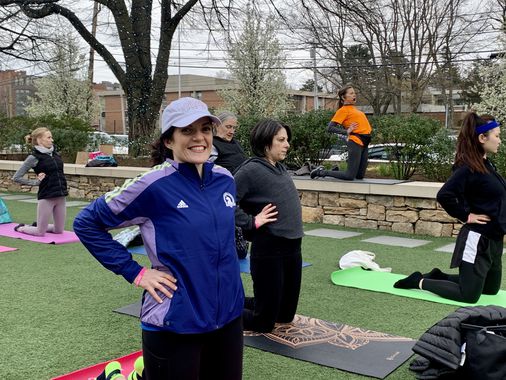 “Many of our patients, faced with a new diagnosis of breast cancer, are very overwhelmed and certainly need a lot of support, whether it’s when they are embarking on treatment, whether it’s transportation support to ‘at appointments, help with childcare. Commander said in an interview. “I hate to say it, but it’s expensive to have a new cancer diagnosis.”

After seeing how the Ellie Fund has helped her patients – one was a young woman with a 2-year-old who was able to undergo chemotherapy without the stress of finding and paying for childcare – she decided to get involved and met with Executive Director Meredith Mendelson. Comander now serves on the board of the Ellie Fund and said she ran the Boston Marathon in October 2021 and April to help raise money for the organization.

“This will be my ninth year running the Boston Marathon in support of different charities,” she said ahead of the April 18 event. “So when I thought about the organization I wanted to run for this year and saw the immense benefits this organization has brought to so many of my own patients, it really was a no-brainer.”

The Ellie Fund’s mission is to reduce the emotional and financial stress of men and women who have been affected by breast cancer, according to its website, www.elliefund.org. For Massachusetts residents or those receiving treatment in the state, according to the organization’s website, the Ellie Fund has spent the past 25 years providing integrative and individualistic therapy services. Some of these services include grocery pickup, light housekeeping, and therapy outside of regular medical treatment for symptom management.

Mendelson said patients and their families are the organization’s top priority.

“Generally with our women, we know they can’t really focus on their own health until they make sure their chicks are all taken care of, and that’s how women are hardwired into as caregivers,” Mendelson said in an interview. “So imagine being sick and having to cook a meal or go grocery shopping.”

Mendelson said she believes the Ellie Fund has helped alleviate the “nightmare” and financial toxicity for patients who have had to undergo treatment during a pandemic.

“Breast cancer is like the second highest form of bankruptcy of all cancers,” Mendelson said. “It’s a very expensive disease to treat, so households are collapsing. People choose between feeding their families or taking medicine.

Dr. Beverly Moy, clinical director of the breast oncology program at Massachusetts General Hospital Cancer Center, said a lot is asked of patients – whether it’s going to appointments or making scanners – which creates a huge burden.

“If you’re in a vulnerable group, like patients who live in poverty or who have social challenges or barriers, it’s especially difficult for those patients to get treatment,” Moy said in an interview.

She said that in life-and-death situations, organizations like the Ellie Fund step in to help patients feel “full again” by providing financial and social assistance to ease the burden of consistent treatment.

“They rely 100% on philanthropy,” she said. “Having events like this and raising awareness of their mission is an incredibly important thing.”

“I also think the wonderful thing about surrounding yourself with people with this positive energy, like Amy and these other organizers, is that it really energizes you and empowers you,” Mulski said in an interview. “So since then I heard about the Ellie Fund, and it really touched everyone in one way or another.”

Comander said yoga was an ideal way to promote physical activity and meet the needs of his patients.

A group of around 25 people took part in the hour-and-a-half event, as passers-by asked questions about the Ellie Fund and even joined in to participate. Nearby stores such as the J McLaughlin clothing store donated merchandise to be raffled off, she said, and Down Under Yoga donated a month’s membership as a prize for attendees.

Mendelson said the community aspect of the event is what really matters at the end of the day.

“I think it’s kind of a collective sigh of relief as a community saying, ‘You know, it’s hard. Breast cancer is really tough,” Mendelson said. “Strength in numbers means you don’t carry that burden on your own.”

If you or a loved one you know is in need of services related to breast cancer support, please contact The Ellie Fund by calling or texting 781-325-4793 if you would like to apply for services, or email email the organization at [email protected] for more information.

Alanis ‘Laney’ Broussard can be reached at [email protected]