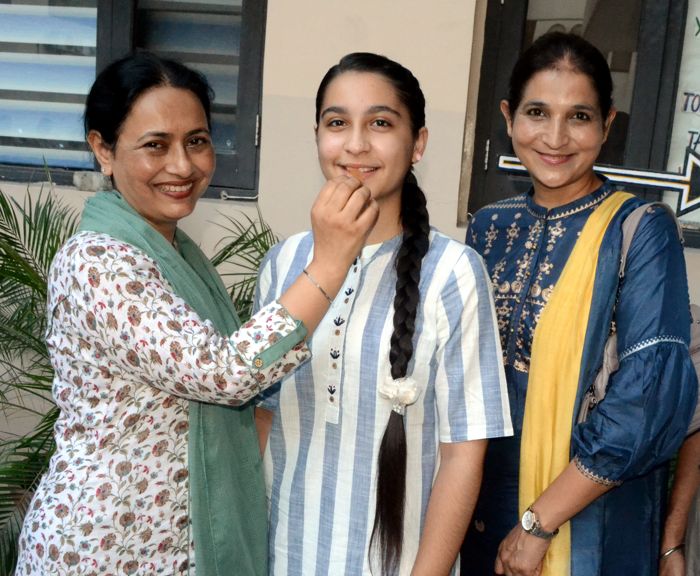 The Indian Certificate of Secondary Education (ICSE) announced the results for Class X on Sunday. Damanpreet Kaur, a student of Sri Guru Harkrishan Public School, Basant Avenue, clinched first place in the district with 98.8% marks . Damanpreet scored 494 points out of 500.

Ishpreet Singh from the same school along with Karman Singh from Holy Heart School and Keerti Singh and Varsha Joshi from Sacred Heart School got the second position with 98.6% marks. They each have 493 points.

The third position in the district was achieved by Khushi Kapoor from Sacred Heart School with 98.4% marks. She scored 492 points out of 500.

Topper Damanpreet, daughter of Dr Harnek Singh and dietician Baljeet Kaur, said she would become a doctor like her parents. She said that instead of joining a coaching institution or a teaching center, she preferred to study on her own.

She used to study late into the night, her parents said. She said she followed a strict schedule, which also involved playing badminton.

Born into a business family, Ishpreet Singh also wants to be a doctor. Her father runs a gas station in the United States and her mother is a housewife. Ishpreet said during the Covid-19 pandemic he was stuck in the United States with his father and couldn’t attend classes. He added that he always wanted to be in the top three in the district. “My dream has come true,” he said.

Keerti, who shares second place with Ishpreet, says she too wants to be a doctor. His parents, Father Kawaljit and mother, Dr. Maninder Kaur are faculty members of Punjab Technical University, Bathinda and Guru Nanak Dev University respectively. She said that outside of class at school, she studied at least five hours a day.

Varsha, who also got the second position, wants to pursue non-medical studies in the future, as she wants to become an engineer. Her father Punit Joshi is a businessman, while her mother Nidhi Joshi is a teacher.

Asked about her success mantra, Varsha said she made a schedule and studied around it. In addition to beating stress, she used to do meditation.

Khushi Kapoor, who was ranked third in the district, also wants to become a doctor. Born to the father of businessman Vikas Kapoor and housewife Ritu Kapoor, Khushi says she dedicates her success to supporting her parents and teachers.