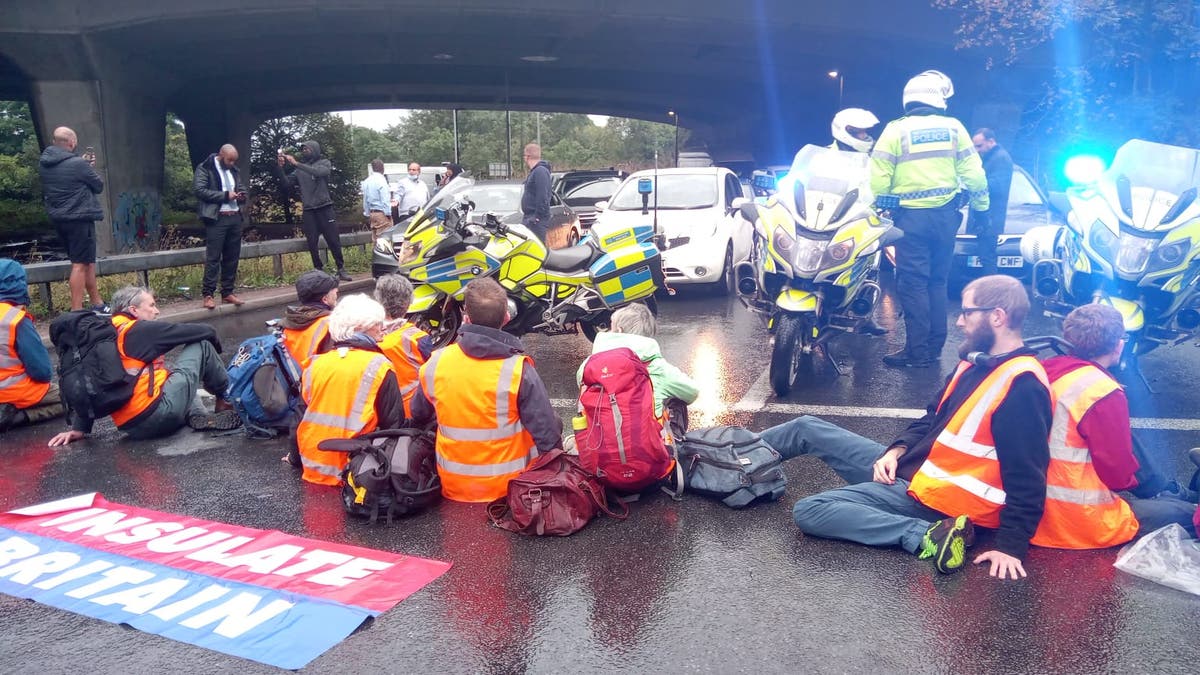 M25 protester mocked after complaining of arrest and search

n The Isulate Britain protester was ridiculed online after complaining that she missed a yoga class when she was arrested and searched by police.

Phillipa Windsor moaned in a tweet to the police watchdog that, while on her way to a Bandha yoga class on Saturday morning, she was delayed by ‘intimidating’ officers who arrested her claiming that she was conspiring to obstruct a highway.

But Ms Windsor was mocked online when she added to the Independent Bureau for Police Conduct: “They couldn’t find any #InsulateBritain banners in my car, were unduly rude and I missed the whole class as a result. . “

Cancer patient Anna Joy asked Ms. Windsor, “What about the way you cause chaos to others? Lost hospital appointments, lost wages, missed funerals due to reckless behavior? “

Jonnie Baxter tweeted: “No sympathy for you at all.”

But Ms Windsor added: “There is nothing funny about it.

“In today’s world, vulnerable women like me have every right to be afraid of being stopped by male police officers in unmarked cars.

A new injunction aimed at preventing climate activists from blocking roads is requested by the government.

Transport Secretary Grant Shapps said he had asked National Highways to seek an order covering major roads in the south-east of England.

A High Court injunction prohibiting people from blocking the M25 was obtained by National Highways last week, but that did not stop Isulate Britain.

It was the tenth day in the past three weeks that the group had been leading protests, blocking freeways for nine days, while on September 24 it blocked A roads near the port of Dover in Kent.

The M25 protest started around 10:30 a.m., with some people sticking their hands to the road while others chained themselves to each other. They were released at 11:50 a.m.

The Met said it “has worked quickly to minimize disruption to motorists.”

Drivers stuck in long lines honked their horns in frustration, one grabbing a banner from an activist.

Isulate Britain said the protesters included eight people released from custody Thursday after blocking the M25 at Junction 30 in Essex, and others who were arrested earlier this week.

He pledged to continue his action until the government makes “a meaningful statement that it will isolate all of Britain’s 29 million fleeing homes by 2030”.

The group said in a statement: “It is incomprehensible that the government continues to delay home insulation measures when we urgently need to reduce our carbon emissions, end fuel poverty and help hard-working families. their growing energy bills.

“In addition, the industry is asking the government to show leadership and support a national modernization strategy. Come on Boris: keep up the work.

Insulate Britain admitted on Thursday that its protests this week were “in violation” of the government’s first injunction.

People who violate injunctions can be found guilty of contempt of court, punishable by up to two years in prison or an unlimited fine.

Mr Shapps said on Wednesday that “we are serving papers” and that some of the protesters “have already knocked on their doors”.

Natalie Deering: What is the ancient medicine of Ayurveda and how can it help with…

Is yoga a religion? | Live Science