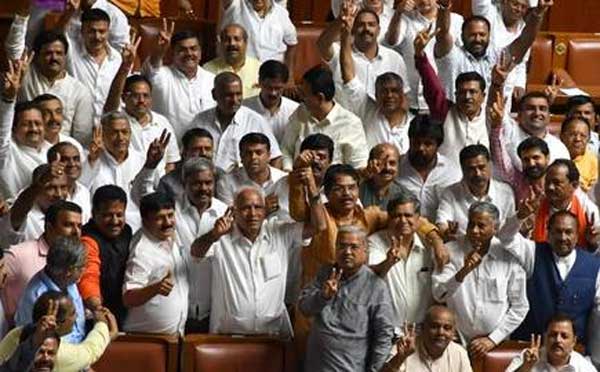 Bangalore, April 15: The BJP state has already started its work for the 2023 assembly elections. Along with the performance of the government, an assessment of MPs is also underway to identify candidates for the upcoming elections.

The BJP is chanting the mantra “Target 150” in order to obtain an absolute majority in the next assembly elections. It currently has 119 seats. As Amit Shah has already asked to draw a strategy, the BJP state leaders are at work according to party sources.

BJP MPs are assessed on the implementation of various central and state government programs in their respective constituencies, in addition to party organization and their relationship with leaders of various communities.

It is also learned that information is collected through lower level workers to know the respective interaction of MPs with party workers.

Party leaders are also asking MPs to self-evaluate. Three teams are on a state tour to get the basic scenario of the projects implementation. They also look at the performance of non-BJP MPs in constituencies where their representation is not there.

It is said that if the workers at the stand level and the local leaders do not give a good impression of the current BJP MP, the party ticket will not be given to these candidates. In the recent UP elections, the BJP did not give tickets to more than 80 sitting MPs for the same reason. It is said that the party will also follow the same pattern in Karnataka.