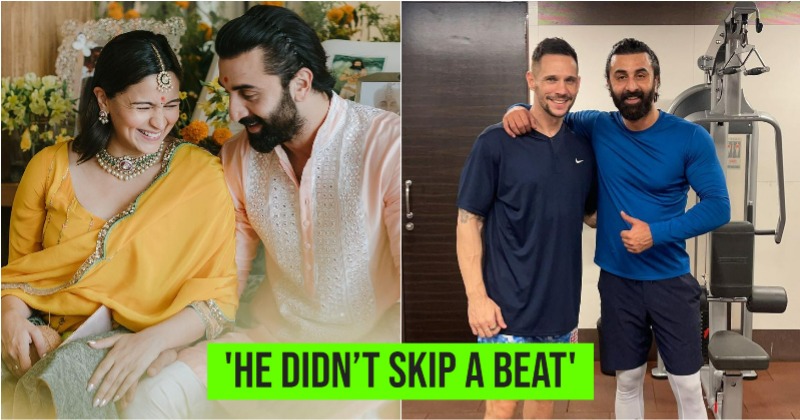 As is now the custom, the new parents received well wishes not only from close relatives, but also from their fans and peers.

One to congratulate the couple was Ranbir’s trainer who shared how committed the star is to his fitness now, even after becoming a father.

The celebrity couple took to Instagram to announce this latest development in their lives.

The post featured a photo of a lion, lioness and their cub, with the caption: “And in the best news of our lives: – our baby is here…and what a magical girl she is. We are officially overflowing with love – blessed and obsessed parents!!!! LOVE LOVE LOVE Alia and Ranbir.

Other celebrities also left their congratulatory messages in the comments.

In a separate post, Drew Neal, Ranbir’s trainer posted a photo of himself with the star. He praised the actor for his commitment to his fitness regimen, noting the fact that Ranbir chose to attend his workout after the birth of his baby girl. Neal concluded by congratulating the new parents.

He wrote: “This guy had probably the best excuse not to hit the gym this week after the birth of his baby girl. However, he didn’t skip a beat and crushed every session Congratulations once again @aliaabhatt @ranbir_kapoooor #mondaymotivation #noexcuses #coach #health #fitness #ranbirkapoor”

The post-sabbatical phase of Ranbir’s career saw him largely eschew the “chocolate boy” image he had cultivated so far, opting instead to double down to become an action star. And that’s why,he has dedicated the last few years to working with some of the best fitness experts in the industryShamshera and brahmastra.

Ranbir will next be seen in a yet to be named romantic comedy directed by Luv Ranjan opposite Shraddha Kapoor.

He is also working on Sandeep Reddy Vanga’s gangster drama Animal which sees him playing alongside stars like Anil Kapoor, Bobby Deol and Rashmika Mandanna.