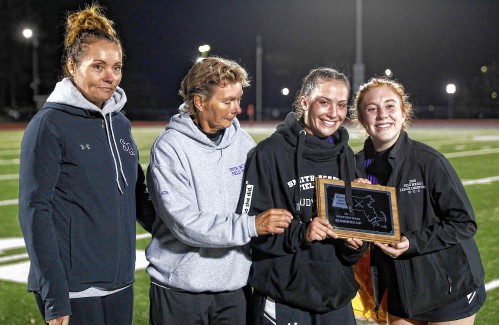 HOLYOKE – Josie Cloutier has put herself in a perfect position.

The Greenfield junior midfielder has found a pocket of space and calm in a sea of â€‹â€‹chaos after a Green Wave penalty corner against Smith Academy during the Western Massachusetts Class B field hockey championship , Thursday.

The ball was returned to him and Cloutier slammed it into the cage 2 minutes and 13 seconds after the start of the third quarter.

â€œLast night’s victory (over South Hadley in the semi-final) was huge. The momentum is totally in our favor, â€said Greenfield coach Erin Thayer. â€œThey were ready to go. Their hearts were there. Their heads were there and our skills were there. We just knew we had to go out and perform and do it. “

“We dominated the entire first half, we had our chances,” said Smith Academy coach Judy Strong. â€œYou saw how many were seated in front of the goal. They have a good guard. But it was our opportunity to put in one or two at this point.

The half-time score line stood 0-0. Thayer knew that the Green Wave had to approach the second half with a different intensity.

â€œAt halftime we had the conversation that we were sort of sitting on our heels, we weren’t moving the balls, the communication wasn’t really great,â€ she said. “We discussed what needed to change, made a few adjustments on the pitch and they went out and performed.”

Greenfield senior Lucy Postera blocked a clearance with her face early in the third quarter, keeping possession on the Smith Academy side. As soon as the restart, La Vague Verte obtained a penalty corner. Some of his junior college players started chanting “Every corner is a goal!” Every turn is a goal! They started it on Wednesday against the Tigers, and while the mantra wasn’t 100 percent successful, it held true at that time.

After the initial corner run, Cloutier pushed back the winner of the match. Then the real work of Greenfield began.

â€œNow we have to make sure we play defensively. Defense comes first. Everyone is playing defense, the offense is going to kick in, â€Thayer said. “Do all the little things to be successful so that we can keep this 1-0 win.”

The Green Wave raised their championship plaque knowing it might not be the only addition to their trophy box. The state tournament begins next week and Greenfield is ranked among the top 32 teams in Division 4 and will advance.

â€œEverything is crazy for us. We don’t know what to expect and where to go, â€Thayer said. “But I think at this point in the season your seasons have their ups and downs, and I’m so proud of the girls that at this point in the season the girls have come together stronger than I have them. views all season and put it together at the right time to go in the right direction.

Smith Academy has the same silver lining. The Falcons are well over .500 at 14-4 and will get a shot in the Division 3 tournament.

â€œWe don’t have to end up like this,â€ Strong said. â€œThis team will bounce back. It’s going to sting and it hurts because we didn’t reach our goal, but they’re also proud of what they’ve done this season.