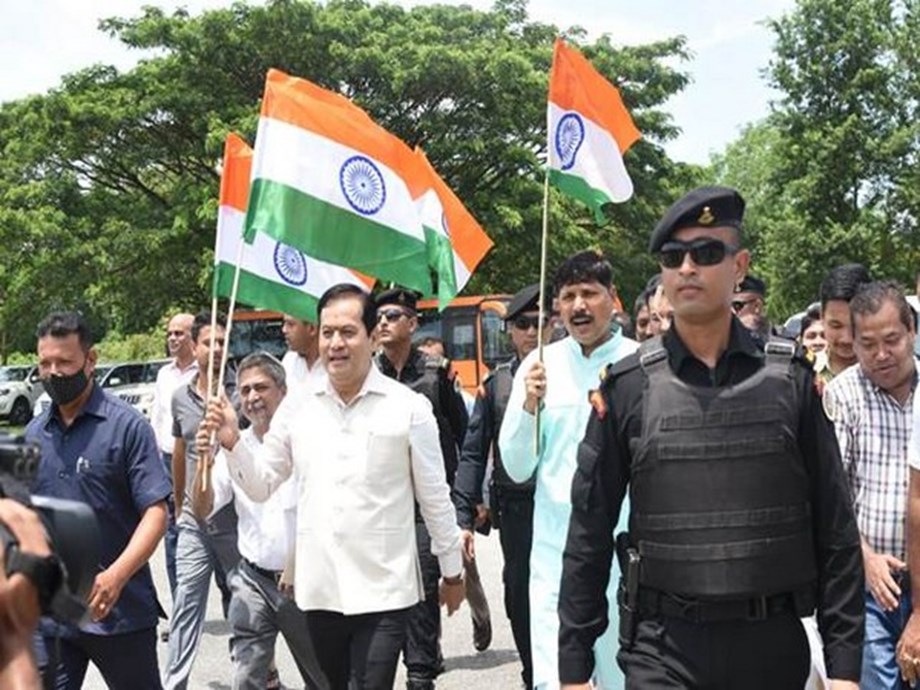 Union Ports, Shipping and Waterways Minister and AYUSH Sarbananda Sonowal attended a public meeting today at Sarusajai Stadium in Guwahati as part of the Azadi Ka Amrit Mahotsav – a national campaign to celebrate 75 years of Indian independence. The minister hoisted the national flag as the crowd sang the national anthem with great pride and passion. Floral tributes were offered to the statue of Karmabir Nabin Chandra Bordoloi, after which the Sonowal led a march with the enthusiastic participation of leaders and the public waving the tricolor and chanting “Vande Mataram” as patriotic fervor floated in the air.

The lively atmosphere of the event reflected the mood of Jan Bhagidari as the common people joined hands with everyone to celebrate the 75th anniversary of India’s independence with pomp and grandeur. Speaking on the occasion, Sonowal said, “The tricolor is our honor, our pride and our symbol of self-respect. Let us join our hands under the pious outline of the tricolor flag to dedicate ourselves to the service of our country. Our Honorable Prime Minister’s call on “Har Ghar Tiranga” has resulted in a massive popular movement. Our Prime Minister has kept the ideals of our freedom fighters as a guiding mantra as he pledges to rebuild our nation. Modiji works tirelessly to make India Vishwaguru and Atmanirbhar.”

“People from all walks of life are celebrating this Independence Day in Assam under the able leadership of Chief Minister Dr. Himanta Biswa Sarmah. their homes in order to stir up the patriotic spirit in the society,” said Sonowal. This Har Ghar Tiranga event, organized at the request of the Ministry of Culture, Government of India, is part of a nationwide campaign, under Azadi Ka Amrit Mahotsav, where dignitaries visit around 400 places associated with the freedom struggle and historical significance across India between August 11 and August 15, 2022. The event also recalled the horrors of partition then which the minister urged everyone to solemnly observe August 14 as the day of remembrance of the horror of partition.

At the event, family members of major freedom fighters were honored by Sonowal. At the meeting, the ultimate sacrifice made by braveheart Kumoli Devi, braveheart Khahuli Devi, braveheart Lerela Kachari and braveheart Tileswari Baruah at Dhekiajuli Police Station at the peak of the Quit India movement in 1942 was recalled. Their family members – Devicharan Neog, Kamal Naam, Jonali Boro and Uttam Baruah – were honored. At the event, the contribution of freedom fighter Robiram Kalita during the Quit India movement was also remembered when in September 1942 he was arrested for collecting money for the freedom struggle in Nagaon. The freedom fighter’s grandson, Pranjal Kalita received honor from the dignitaries on the occasion.

The event also brought to mind one of the main leaders of the Indian Freedom Movement, Bharat Ratna Lokapriya Gopinath Bordoloi and Deshbhakta Tarun Ram Phookan. Respective family members Bolin Bordoloi and Shyamanta Ram Phookan were honored on this occasion. Family members of freedom fighters were honored with a Gamusa, Eri Shawl, Cheleng Saador, Jaapi, Xoraai and a national flag. Sonowal said, “We won our independence through dozens of freedom fighters who sacrificed their lives for the cause of the country. Their sacrifice and love for country is an inspiration to the people of this county. They inspire us to strengthen our country as their love for the country unites us With great respect, I remember these noble souls.

Embracing the need for a new India, Sonowal said: “Until 2047 when India completes 100 years of independence, we have 25 years of Amrit Kaal. Our popular leader Modiji has emphasized during this a time when we must invest ourselves fully and responsibly in nation building so that India becomes an Atmanirbhar and the best country in the world.” Notably, Indian citizens, on earlier occasions, have been prevented from hoisting the national flag except on a number of occasions. That changed after a decade of legal battle led by industrialist Naveen Jindal that ended with the historic Supreme Court judgment of January 23, 2004, declaring that the right to fly the national flag freely with respect and Dignity is a fundamental right of every Indian citizen within the meaning of Article 19(1)(a) of the Constitution of India.

(This story has not been edited by the Devdiscourse team and is auto-generated from a syndicated feed.)