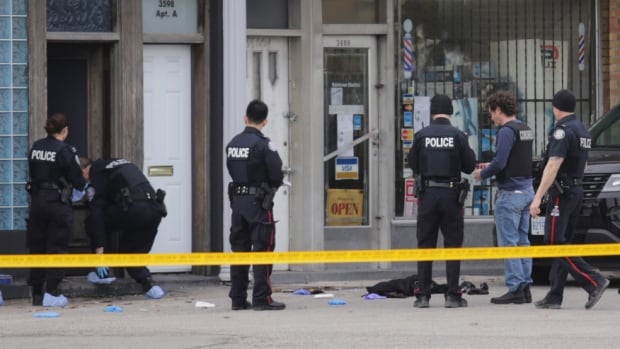 The man behind an Incel-inspired attack on a Toronto massage parlor two years ago has pleaded guilty to murder and attempted murder charges – citing the man responsible for the attack murderer of the city as “inspiration”.

The accused, who was 17 at the time of the murder, cannot be named under the Youth Criminal Justice Act. Now 20, he pleaded in Ontario Superior Court before Judge Suhail Akhtar on Wednesday morning, where the court heard he had been considering committing his violent acts for months.

Leaning forward with his head bowed, the accused spoke softly as he answered “yes” to the judge, who explained that pleading guilty waived his rights to a trial and an appeal.

When his accusations were read aloud, he clearly answered “Guilty” to both.

When asked why he identified as an incel, the teenager told police in a statement: “You don’t choose to become an incel. You were born one.”

The plea does not cover associated terrorism charges against the defendant, which were added in the months following the February 2020 murder of 24-year-old Ashley Noell Arzaga and the stabbing of another man and another woman at the Crown Spa in the west end of town.

Arzaga suffered at least 42 stab wounds, including 15 defensive wounds, according to an agreed statement of facts.

The case is believed to mark the first time terrorism charges have been brought in relation to an act fueled by incel ideology. The van killer, Alek Minassian, was never charged with terrorism. The judge who convicted him noted that he mentioned in some interviews that he linked his actions to the incel ideology for notoriety.

A woman grabbed a man’s sword, ending the attack

The Incel ideology or involuntary celibacy began as a misogynistic subculture online and is generally characterized by hatred or blame against women for their inability to find a romantic or sexual partner. The term gained attention in 2018 when a man who published an article about a so-called “incel rebellion” drove a pickup truck onto a sidewalk in Toronto, killing 10 people and injuring 16 others.

According to an agreed statement of facts, the woman who survived the attack managed to grab a nearly half-meter-long sword from the assailant after it had been stabbed several times, and returned the gun on the man, stabbing him in the back and ending the rampage.

As he attacked her, the teenager told her: “Die, die, die”, calling her a “stupid whore”.

After stabbing the man, the woman then managed to walk into a nearby business and asked someone inside to call the police.

The court saw a 20-minute compilation of surveillance video in which the young man was seen stabbing Arzaga, the receptionist at the massage parlour, to death. The sequence begins with the teenager leaving his home on foot less than two kilometers from the spa and shows in detail the moment he drew the sword, killing Arzaga.

Family members and loved ones of the victims were visibly moved, sticking together as the scenes played out on large screens in the courtroom.

CBC News spoke to the woman who survived, who said she hoped the judge would give the defendant the maximum sentence given the evidence against him. The woman cannot be named because her identity is protected by a publication ban.

When asked how it was to see the surveillance video, she replied, “I’ve seen it many times before. I’m strong.”

The woman said she expected being in the same room as the attacker to be ‘much more difficult than it was’, adding that she was grateful for all the support she received. has received.

“My life is ruined”, says the attacker

The court heard that the defendant was found with a handwritten note following the attack, reading: “Long live the incel rebellion”.

As to why he was carrying the note, he told police: “I wanted everyone to find it. I wanted the world to know that people like us exist and it’s not really fair. “

The court also heard that the sword used as the murder weapon bore the words “thot slayer” – “thot” being a pejorative term used against women.

When one of the paramedics asked him what happened, the court heard he replied that he ‘wanted to kill everyone in the building and I’m glad I got one’.

The accused stated that he did not recall making this statement, but did not dispute having done so.

In his statement to police, the then teenager told police he did not expect to be alive at the end of the day and believed the police would have killed him.

He also noted that he was afraid of how other inmates might treat him behind bars.

A judge will now determine whether the defendant’s actions meet the bar for terrorist activity.

The Criminal Code defines terrorism as an act done “for a political, religious or ideological purpose, purpose or cause” intended to intimidate the public by causing or attempting to cause death or grievous bodily harm by violence, endangering health and safety or disrupting an essential service.

Arlo Parks, a voice for the next generation