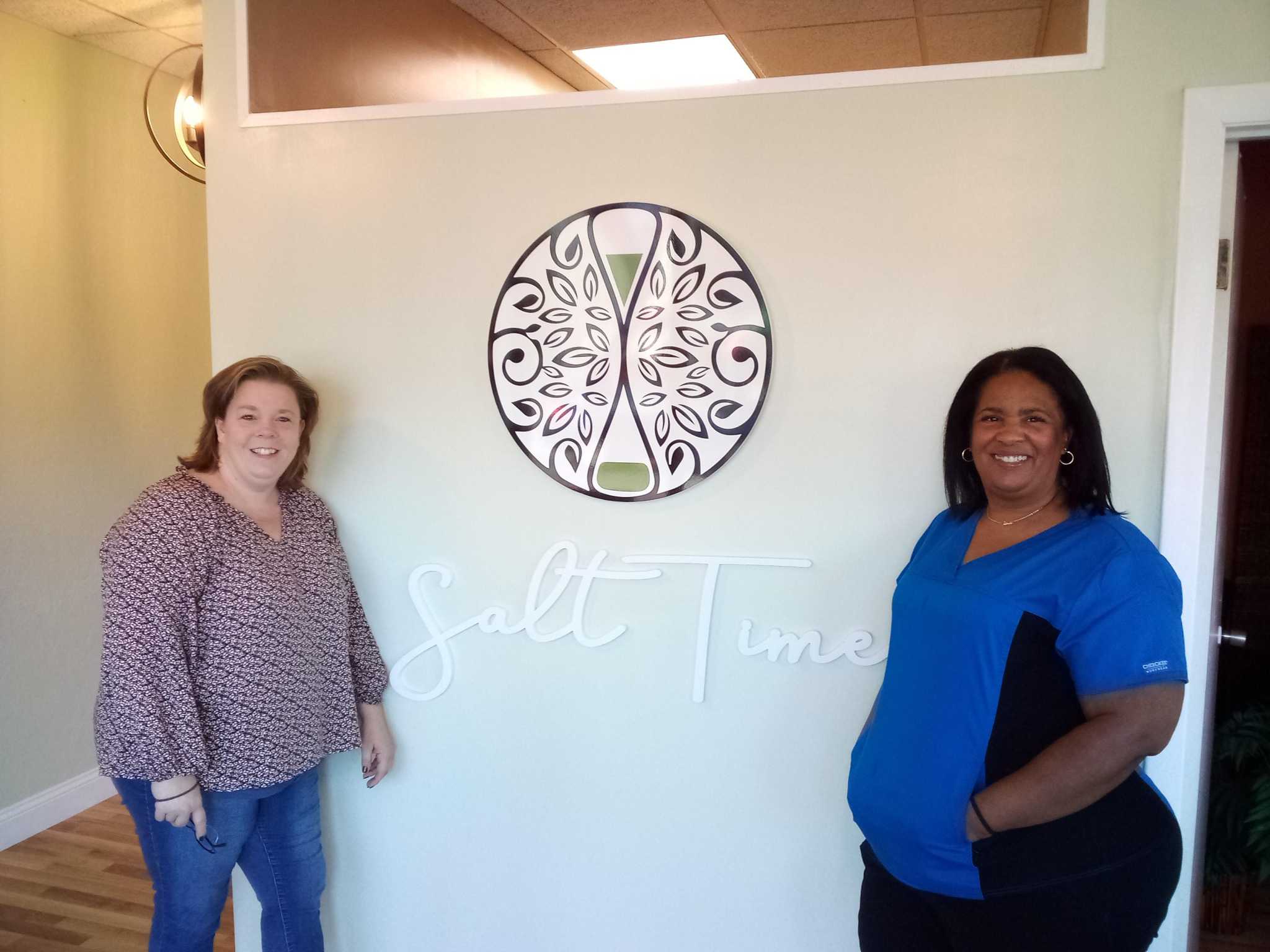 TORRINGTON – Two longtime friends have brought the purported power of pink Himalayan salt to the masses in a new spa that focuses on cleansing the mind and body, promoting relaxation and healing.

Joye Jones and Melissa Rahming opened Sal Time on Main Street earlier this month after looking for something to start off together and learning about the benefits of pink salt.

A popular method of self-care is to use salt as a body detox or as a way to relieve tension, joint pain, or muscle pain. According to himalayansaltfactory.com, â€œThe rejuvenating and purifying benefits of the Himalayan salt bath have long been appreciated by Eastern and Western traditions. Bathing in Himalayan salt has the added benefit of absorbing minerals that are important for the proper functioning of the body.

Jones is a nurse who works at the Institute of Living in West Hartford, while Rahming is a mental health therapist with her own practice in Collinsville.

They chose Torrington for their spa, which opened on October 2, due to increased business activity and the town hall’s economic development efforts, Rahming said. â€œI see a lot of development downtown,â€ she said. “So that’s where we wanted to be.”

She walked past the building at 257 Main Street on the corner of East Pearl Street, stopped dead and came back.

â€œIt was exactly what we wanted,â€ she said. â€œAnd the owner was amazing. We had to find a place where we could change it.

The friends met in a Lamaze class who were pregnant with their first children, who were then born three weeks apart. Their second children were born five months apart. â€œThen Joye had two more children,â€ Rahming said. â€œBut we were still together; our children grew up together.

â€œWe’ve talked so much about different business ideas over the years, and our husbands back then worked nights, so we did it all together,â€ Jones said. â€œMelissa’s sister lives in Maryland and has visited the Salt Caves there, where they are very popular. She loved them. So when she said, â€œDo you want to open a business? I said okay.

â€œWell, I did a lot of research,â€ Rahming said. â€œI visited spas, I inquired about it. There is a lot of information, and there are associations, that we have joined, where you can attend webinars and conferences to learn as much as possible. Connecticut is behind the game with this treatment.

â€œThere are so many benefits to our health,â€ Jones said. â€œWe had to learn the science behind it. It helps so much with breathing problems, allergies, COPD.

Once the building was secured, they set out to convert the large open space into smaller rooms. One has become a salt cave, with dim, amber lighting, comfortable recliners, and a thick layer of pink Himalayan salt on the floor. For 30 minutes, customers relax in the armchairs listening to the music of their choice. Jones said the benefits include relief from allergies, asthma, COPD, sinus infections, and other respiratory problems.

â€œI have terrible sinuses and I’m still blocked. After being in there, I coughed, I sank; it was salt, â€Rahming said. â€œThe next day I felt amazing.

â€œI have terrible allergies so this has helped me too,â€ Jones said.

Another room uses infrared heat and salt. Guests are sitting in a cedar bedroom and sweating; the result is relaxing, cleansed skin free from dirt and other properties. â€œThis treatment uses dry heat, so you sweat a lot,â€ Rahming said. “A lot of cancer survivors have said they love it, that once they finish chemotherapy treatments their doctors recommend it.”

In a third room, a client can have a Foot Ion Detox. The client puts his feet in a small tub of salt water; using an ionizer device in the water, the feet are treated and the water eventually changes color. A table shows which properties were cleaned, based on those colors.

â€œIt works great – your feet are amazing,â€ Jones said. “I couldn’t believe it, about the colors of the water, from what the treatment took away, but it really works that way.”

The spa also runs yoga classes, led by Alyssa Longhi Yoga in Torrington. â€œLisa will be doing yoga, reiki, breathing and meditation sessions, and on Friday we will have yoga with salt therapy,â€ Rahming said.

Salt Time offers a variety of rates and packages for its services and will accommodate groups for a birthday party or just a girls’ night out. â€œIt would be a fun night for a group to do together,â€ Rahming said.

Spalato Spa, for a quality wellness experience in Split

Why George Harrison was so angry with John Lennon’s death