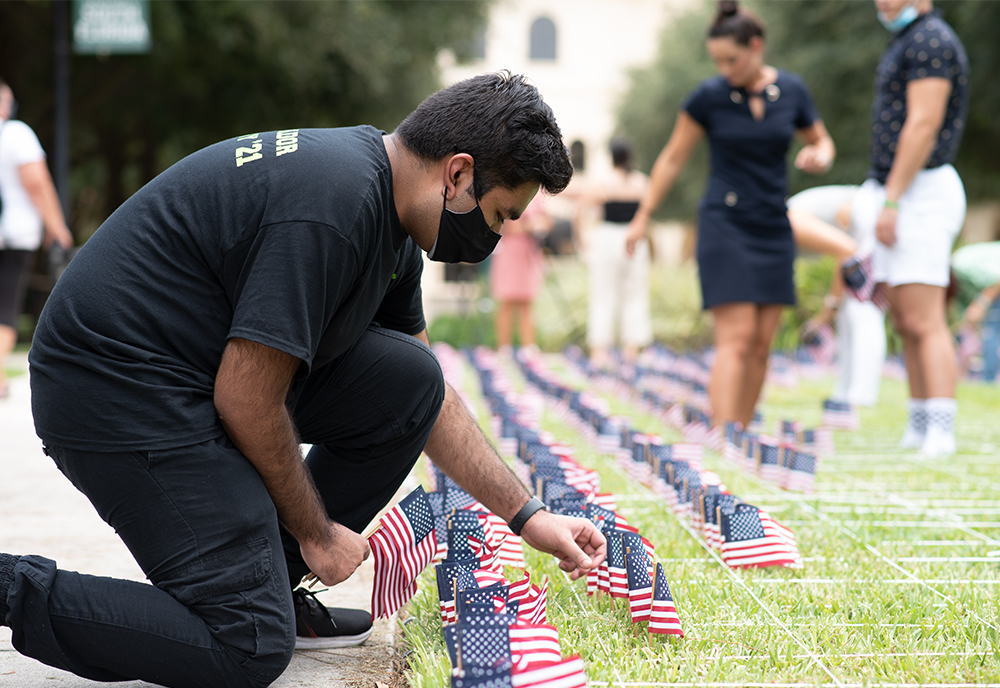 “When was the last time you spoke? What was the last thing they said to you? “How do you know they were inside the World Trade Center?” ”

This line of questioning will forever be anchored in the mind of USF Assistant Professor Bonnie Silvestri. In the weeks following the September 11 terrorist attacks, she worked for the death certificate program. As the then representative of the New York City Conflict of Interest Council, she was tasked with speaking to grieving families of loved ones who have been missing since that fateful day. Silvestri had to gather evidence and determine the likelihood that they were inside the World Trade Center when it collapsed or on one of the planes that crashed into the Twin Towers.

â€œReading the affidavits burned my eyes. Each person had to recount the routine and the last contact of their loved one to demonstrate that the victim had indeed been in the building. They had to prove in court what they could probably hardly admit to themselves – their certainty that a person they loved could not have survived, â€Silvestri said. â€œA mother said her daughter’s last words, ‘Help me, Mom,’ before the line was cut. I get a chill every time I think of these words, and then I remember the torment this mother will experience with the rest of her life.

It was a professional experience no one could have imagined, but one that has helped shape the way Silvestri teaches his service learning and law classes on the USF Sarasota-Manatee campus.

â€œIt was incredibly stressful going through what happened on September 11th, so being able to go to the Family Assistance Center and listen to other people’s stories and realize that I had skills I could offer to help them. or making them feel a little better has been a very good healing for me, â€said Silvestri. â€œBeing able to offer my legal training to help in the aftermath of 9/11 helped me discover in a very visceral way that service to others is a very powerful thing. It has influenced the way I teach, especially the service learning courses. I talk about this in my classes to emphasize to students that serving others in the community can help them better understand social issues and design more effective ways to effect positive change.

Across the campus yard, 2,977 flags were placed this week in honor of each of the lives lost. Former US President George W. Bush was in a second grade class in Sarasota when he learned the country was under attack. Since then, the USF Sarasota-Manatee campus has hosted annual memorial services. For the 20th anniversary of September 11, a commemorative ceremony will be open to the public on Friday, September 10 at 8:15 a.m. with guest speaker Garrett Lindgren. As a former New York City firefighter, Lindgren arrived at the North Tower of the World Trade Center right after the collapse and worked at Ground Zero for months until he suffered end-to-end injuries. to his career by digging through the rubble.

Thousands of firefighters and EMS workers continue to experience respiratory problems caused by persistent exposure to dust and smoke during rescue operations at Ground Zero. USF Health pulmonologist Dr. Gaetane Michaud joined USF Health from New York University, where she had treated many patients with residual lung damage from the caustic dust and debris that covered much of New York. York after the fall of the two towers of the World Trade Center. Now in Tampa and a faculty member at USF Health, she’s starting to see similar patients as many from the New York City area have retired and moved to Florida.

â€œThe true impact of September 11 on health may never have been known,â€ said Dr. Michaud. â€œOne of the most important things survivors need to know is that the exposure could be due to their presence on September 11 as well as recurring exposure at Ground Zero for up to six months after September 11. And there were many, many young people who were exposed or those who moved from New York City who might be in trouble now and they don’t relate those conditions to their exposure.

The terrorist attacks inspired countless careers at USF. Elizabeth Dunn, an instructor at USF College of Public Health, was in her final year of high school in Texas when the tragedy unfolded. As a volunteer with the American Red Cross, she led the effort to raise over $ 60,000 at her school. She is currently an educational consultant for the American Red Cross Club at USF.

â€œIt certainly influenced the direction I was taking in terms of my career. After working with the Red Cross, I realized how much I enjoyed mobilizing people and coming together, â€said Dunn. â€œIt gave me the opportunity to work with others to take action and do what we can to help those affected by the World Trade Center attacks in New York from our small town in Texas. Then, in 2012, I was able to deploy to New York with the Red Cross in response to Hurricane Sandy. ”

Dunn now teaches Homeland Security and Emergency Management courses to include Exercise Design, which focuses on how to test plans and policies by creating an emergency response scenario, such as a shootout. mass or natural disaster event, allowing agencies to practice working together. in real situation. Students learn how to build a more resilient community by understanding what it takes to coordinate the response and recovery efforts necessary to protect our critical infrastructure sectors that are vital to national security, such as healthcare systems and public health, emergency services or energy and communication sectors.

Students worked alongside community partners from the Hillsborough County Office of Emergency Management, Florida Department of Health (FDOH), TECO Energy, American Red Cross, Tampa International Airport, and the Morsani Ambulatory Surgical Center on the USF campus in Tampa to develop and participate in various exercises. . They gain additional hands-on experience as evaluators during the annual large-scale FDOH exercise which includes over 40 agencies and over 500 actors who deploy to 16 Hillsborough County hospitals to test their responses to an incident. causing many victims.

The students also participated in various exercises involving people from the Centers for Disease Control & Prevention, the Transportation Security Administration, the US Coast Guard, and MacDill Air Force Base, which is home to the United States Special Operations Command and US Central Command. – the military branch responsible for protecting American security interests, especially in the Middle East.

Many USF student veterans have joined the military to fight the war on terror. Wayne Taylor, deputy director of veterans services and coordinator of the Military Families and Veterans Success Center on the USF campus in St. Petersburg, made it his mission to ensure that veterans receive the support and health care they deserve. He joined the USF in 2020 after touring several times, notably in Afghanistan, throughout his 20-year career in the US military.

â€œI cannot speak for all veterans, only myself. On occasion, I have the chance to represent our veteran students and our military-related student body who are affected by military service, â€said Taylor. â€œMany are frustrated with our departure from Afghanistan, especially because many cannot understand the atrocities we have seen under the Taliban. Young girls will no longer have the opportunity to go to school, as they age, education and work are no longer options, but rather face a life of bondage. We remind our veteran students that any Afghan who could have come to the United States or any other country might not have had this opportunity without our presence. They made the difference.

Taylor recently initiated ongoing â€œsafe spacesâ€ meetings for veteran USF students who have served in Afghanistan to openly discuss their feelings about the troop withdrawal. Some students have relived the shock and anger of experiencing the Taliban’s misdeeds and fear their sacrifices of the past will make no difference in the Arab nation of today. The meetings are also open to Afghan students from all three campuses.

Also on the St. Petersburg campus, Arturo Jimenez-Bacardi is an assistant professor of international relations and political science. He said he was inspired by the post-9/11 wars and in particular by the “improved interrogation techniques” or the Bush administration’s torture program. His research focuses on the tension between security and human rights, examining how international law affected the use of torture by the US national security system during the war on terrorism.

â€œWhen stories about the US use of torture started to surface between 2004 and 2006, I wanted to understand why the US would put in place such a system and if and how the laws – international and national – affected American behavior, â€Jimenez-Bacardi said. “I was a student at the time, but these wars and counterterrorism operations motivated me to get a doctorate to try to understand why and how they were set up as they were and why and how they evolved. . ”

Jimenez-Bacard is currently working on a book, “Speaking Law to War”, in which he explores if, why and how states comply with their international obligations in times of great threat. He expects it to be released in 2023.