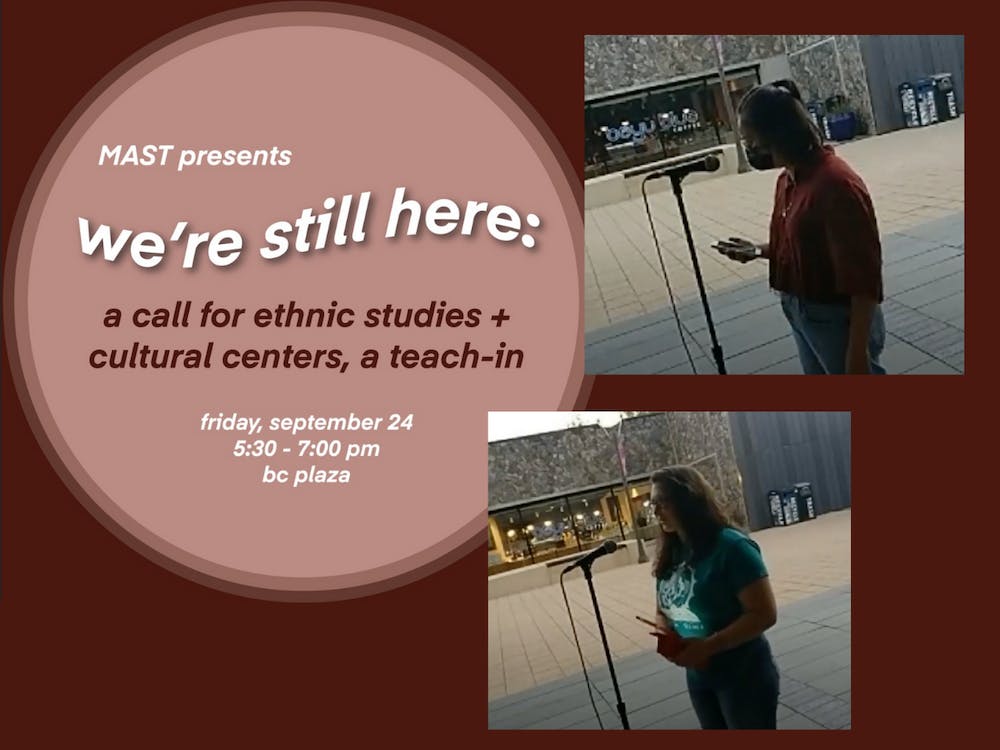 We are still there: the MAST organizes a teaching to defend the department of ethnic studies, the cultural centers

Duke just isn’t doing enough for his Asian community, speakers said at an event hosted by Mobilizing Asian Students Together at Duke on Friday.

On September 24, MAST hosted a seminar in Bryan Center Plaza, where students, faculty and staff called on the university administration to support marginalized students, ethnic studies, and cultural centers. Speakers at the event reiterated demands from campus cultural groups and relevant departments.

“Duke fails again and again to ensure that his students of color and minority backgrounds are institutionally included in all academic and social settings,” said junior Miriam Shams-Rainey, who hosted the event.

“Duke does not seriously invest in ensuring that ethnic studies departments that explore the history and reality of people of color, both in the United States and around the world, are treated as essential sources of knowledge.” , continued Shams-Rainey.

Shams-Rainey also reiterated requests released by Duke Asian Students in March 2021 and reiterated since then. These include requests for the institutionalization of a department of ethnic studies, the creation of cultural centers that better meet the needs of students, the disaggregation of admission data for Asian, Asian-American and Islander students. Pacific and a call for accountability systems in response to incidents of hate and prejudice.

These requests were echoed by other speakers, including Scarlett Guy, a member of the Cherokee Nation Oriental Group and president of the Native American Student Association.

Guy detailed the history between Duke and the Native Americans, starting with the Cherokee Industrial School, where Trinity College of Arts & Sciences admitted 12 children from the Eastern Band of the Cherokee Nation and worked to assimilate them.

â€œDuke, because they had the Cherokee Industrial School, directly contributed to the endangerment of the language of my people,â€ Guy said.

Guy recalled the efforts she had to make to take Cherokee language courses – none of which are offered at Duke – ultimately having to take courses at the University of North Carolina-Chapel Hill as part of the interagency program. by Duke.

This experience, along with the lack of counselors who understand her interest in community-centered careers, is why she believes Duke needs more resources for Native American students.

â€œThat way other students don’t need to have my experience. They can stay at Duke to take the courses they want to take and get the counselors they need, â€Guy said.

Get The Chronicle delivered straight to your inbox

Subscribe to our weekly newsletter organized by an editorial. Cancel anytime.

“You shouldn’t have to go out of your way to learn your history, or learning your history, language or culture should at least be an option, which has never been for me and it wasn’t for many. others, â€Joy said. .

â€œYou should be able to explore geopolitics without the extreme bias of US imperialism, white supremacy and Eurocentrism, which plague so many of our departments. But today, it’s a reminder that student organizers and young people are not so easily intimidated, â€they continued.

Other speakers described and drew parallels between past efforts by student activists and current calls to action.

This story, he said, shows that caring about Asian American studies at Duke in 2021 is “caring about the struggle.”

Esther Kim Lee, professor of theater and international comparative studies and director of the Asian American and Diaspora Studies program, explained that when starting her position at AADS, there was no space, support or staff for the program.

Lee cited the moratorium on new certificate programs implemented in 2016 and the inability to create a minor program separate from an existing major program as structural issues that â€œ[make] it is difficult for an innovative and exciting new field like Asian American Studies to get started.

â€œThis is the kind of resource shortage I’m facing,â€ Lee said. “I’m doing my best. I hit a lot of walls.

But the students who have advocated to make the program possible challenge her to “fight as hard as [she] can, â€Lee said.

“I am truly honored that over 20 years of activism is the basis of the program, and I will truly use every ounce of energy I have to build a program.”

AADS guest researcher Rachel Kuo spoke about the relevance of ethnic studies, especially in national and political conversations and in discussions about the impact of modern technology.

“I think the kind of momentum to organize and demand these spaces, to know how the intellectual and political issues that emerge from a field of study that is not neutral and politically committed to liberation are so important, â€Kuo said.

A lack of space for cultural organizations was noted by several speakers, including Sebastian Ochoa, president of Mi Gente.

â€œObviously, there is an increased desire for representation on campus,â€ Ochoa said.

Maryam Arain, student development coordinator for the Center for Muslim Life, led the group in a pranayama breathing exercise, noting that to “stay grounded, build community, experience joy and heal yourself” in the face of “marginalization” active “, activists must reconnect with themselves.

â€œYour well-being keeps your soul grounded, your vision and mind sharp, and your vessel clear for healing. Stay the course. Be the keeper of visions instead of pain, â€Arain said.

Anna Storti, assistant professor of gender, sexuality and feminist studies, noted that ethnic studies are an “institutionalized and sanitized version of Third World studies” and that it is important to understand the discipline as ” relational â€.

â€œThinking about relationships is not easy, but it is a crucial step in solidarity,â€ said Storti.

â€œI suggest that we release Asian American studies from Asian Americans. In doing so, we come to analyze the material conditions that have shaped Asian life and the lives of all. Thus, we come across the many ways that people of color deeply challenge power and the dislocation it produces. “

Elmer Orellana, former student development coordinator at the Center for Multicultural Affairs, spoke about the importance of cultural spaces on campus.

â€œWe need spaces where we can be ourselves, ourselves, in community with one another, to bring solidarity between our groups. And I hope that, you know, this is the last time that we have to demand spaces, spaces so that we feel we belong, that we matter, â€said Orellana.

â€œEven after the establishment of Ethnic Studies, a cultural center, there is still work to be done,â€ sophomore CÃ©line Wei said at the close of the event.

Preetha Ramachandran is Trinity’s junior and senior editor for the 117th volume of The Chronicle.